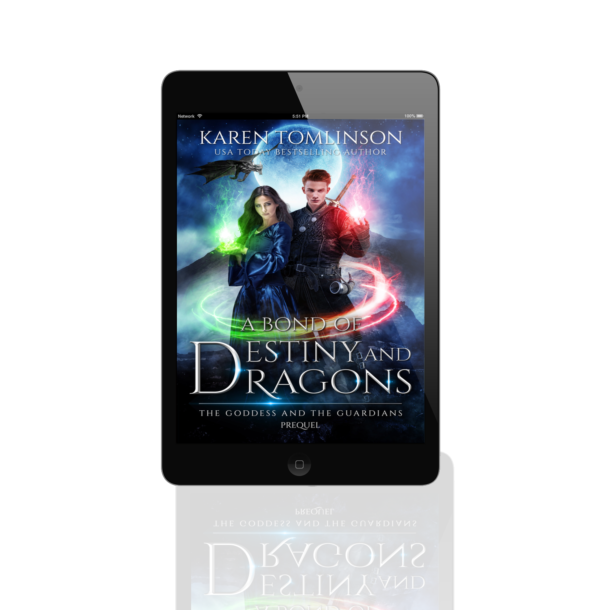 Read A Bond of Destiny and Dragons: A full-length standalone prequel to The Goddess and the Guardians series. 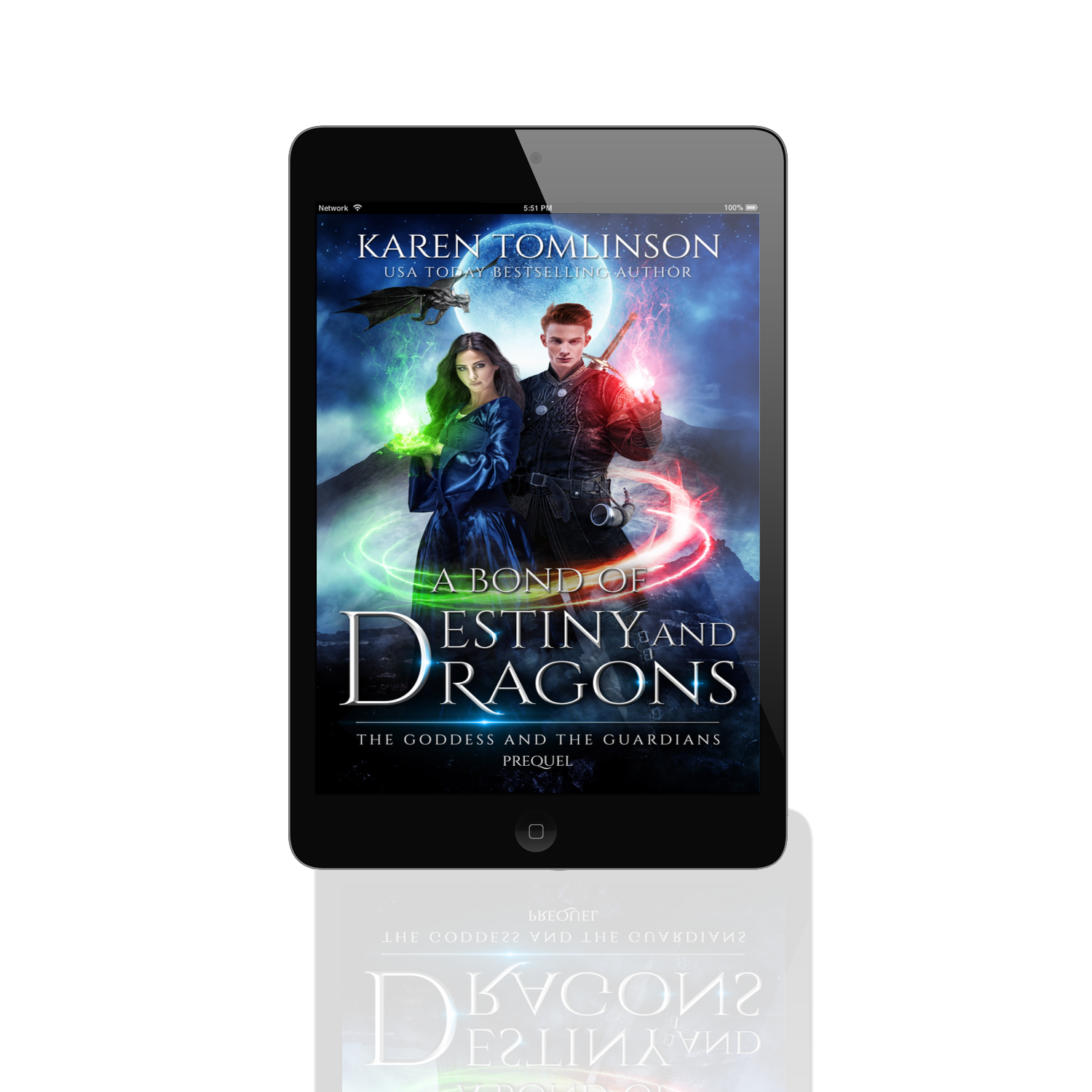 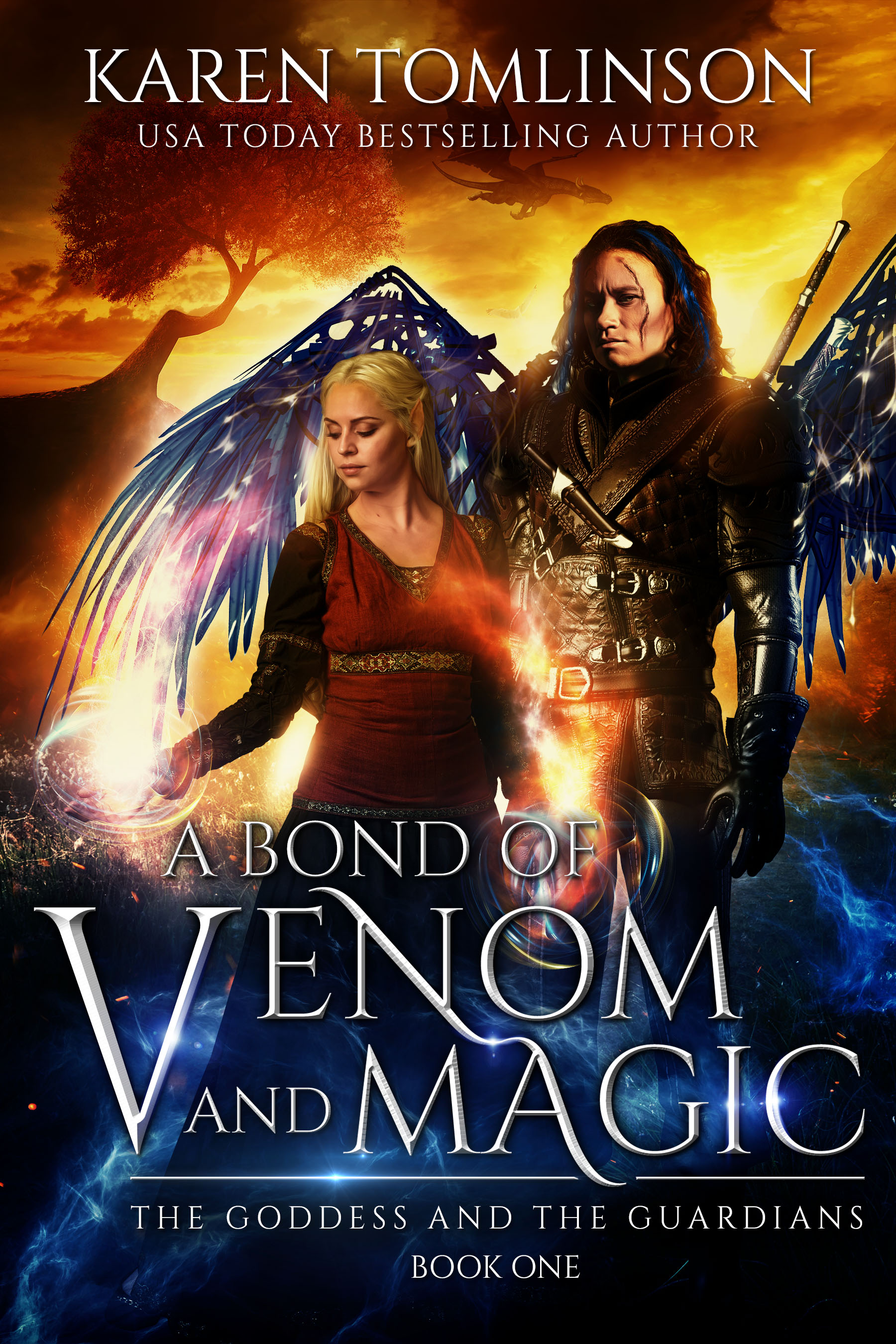 A Bond of Venom and Magic

The Goddess and the Guardians

The war raging in the South seems a remote danger for seventeen-year-old Diamond until her home is brutally attacked. Catapulted into a terrifying new existence where legendary beasts arise, magic is condemned, and half-blood fae like her have no rights, Diamond is inexplicably drawn to Commander Hugo Casimir. But he is a ruthless elite guard owned by a cruel, immortal fae queen who murders her own people for magic.

A prisoner in Hugo’s world, Diamond’s circumstances become ever more perilous; for the Queen covets more than just magic. Diamond must escape—before her fate, and that of The Eight Kingdoms is sealed in shadow and chaos.

When her life hangs in the balance, will Hugo prove to be her friend and ally, or an enemy unworthy of her heart?

A Bond of Venom and Magic is the first instalment in this breathtaking fantasy series. Perfect for fans of Sarah J Maas and Holly Black. Hold onto your heart, dive in and be swept away in this spectacular epic adventure. 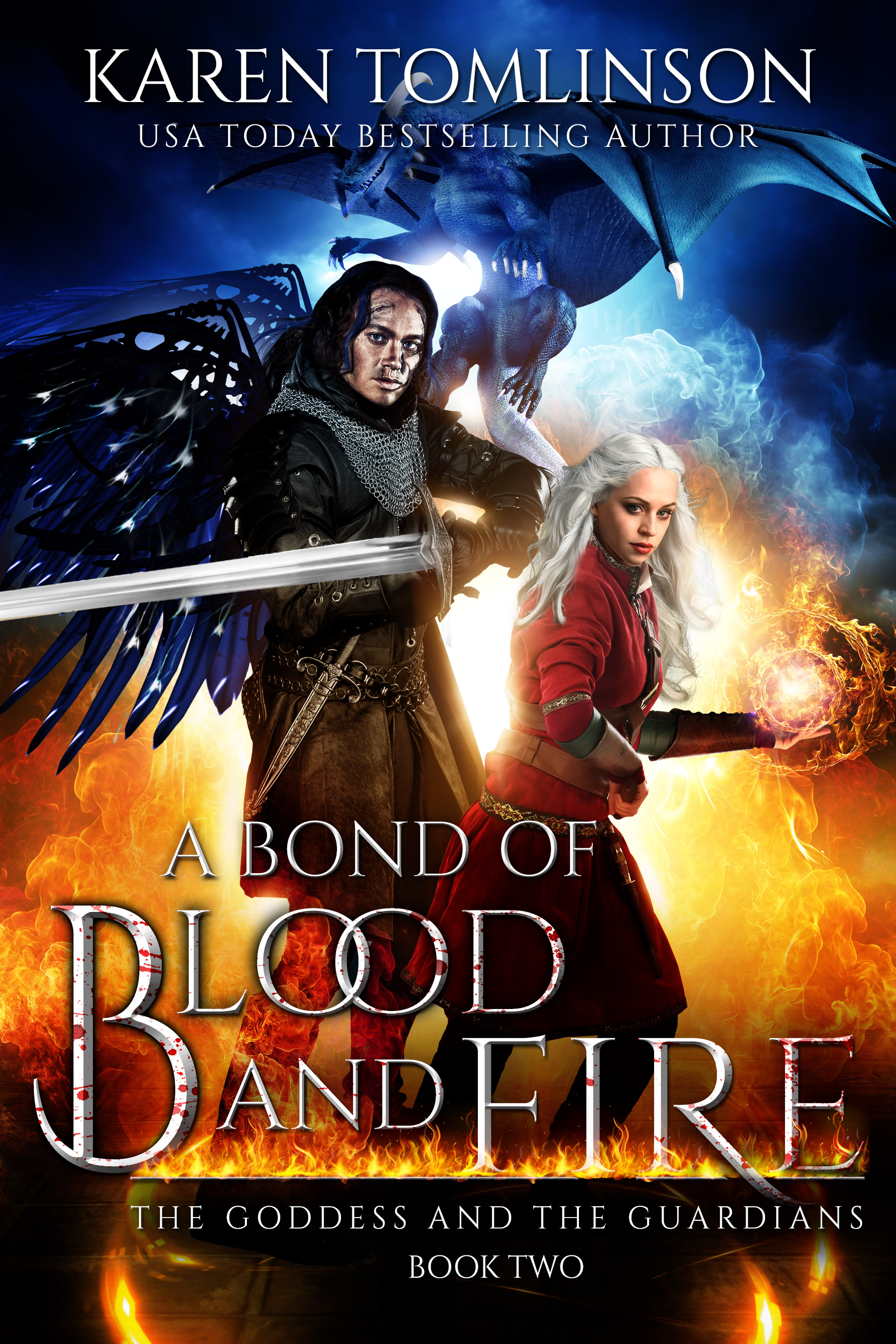 A Bond of Blood and Fire

A love bathed in fire. A destiny sealed with blood.

In a world ravaged by war, half-blood fae Diamond Gillon must fight to survive.

Becoming a magical weapon for the fae queen and defending the capital city of Valentia from the Wraith Lord is the only way to save her beloved friends from execution. But mastering the destructive force of her magic proves a terrifying, if not impossible, task.

Diamond loathes Commander Hugo Casimir, the queen’s guard ordered to train her. Once her friend, he is now her enemy. To complicate matters, the two share a rare, magical connection—a bond that will ultimately shape not only their destiny, but their hearts.

Love and loyalty will be tested as Diamond battles giants, an ancient dragon, and an army of monstrous creatures in her quest to save Valentia. She must find a way to defeat the Wraith Lord and save those she loves, or the Eight Kingdoms will descend forever into bloodshed and chaos.

Lovers of Sarah J Maas and Holly Black will devour this thrilling second instalment in The Goddess and the Guardians series. This fast paced fantasy is packed with action and adventure. Read now and be transported into a world where winged warriors and shifters compete for centre stage. 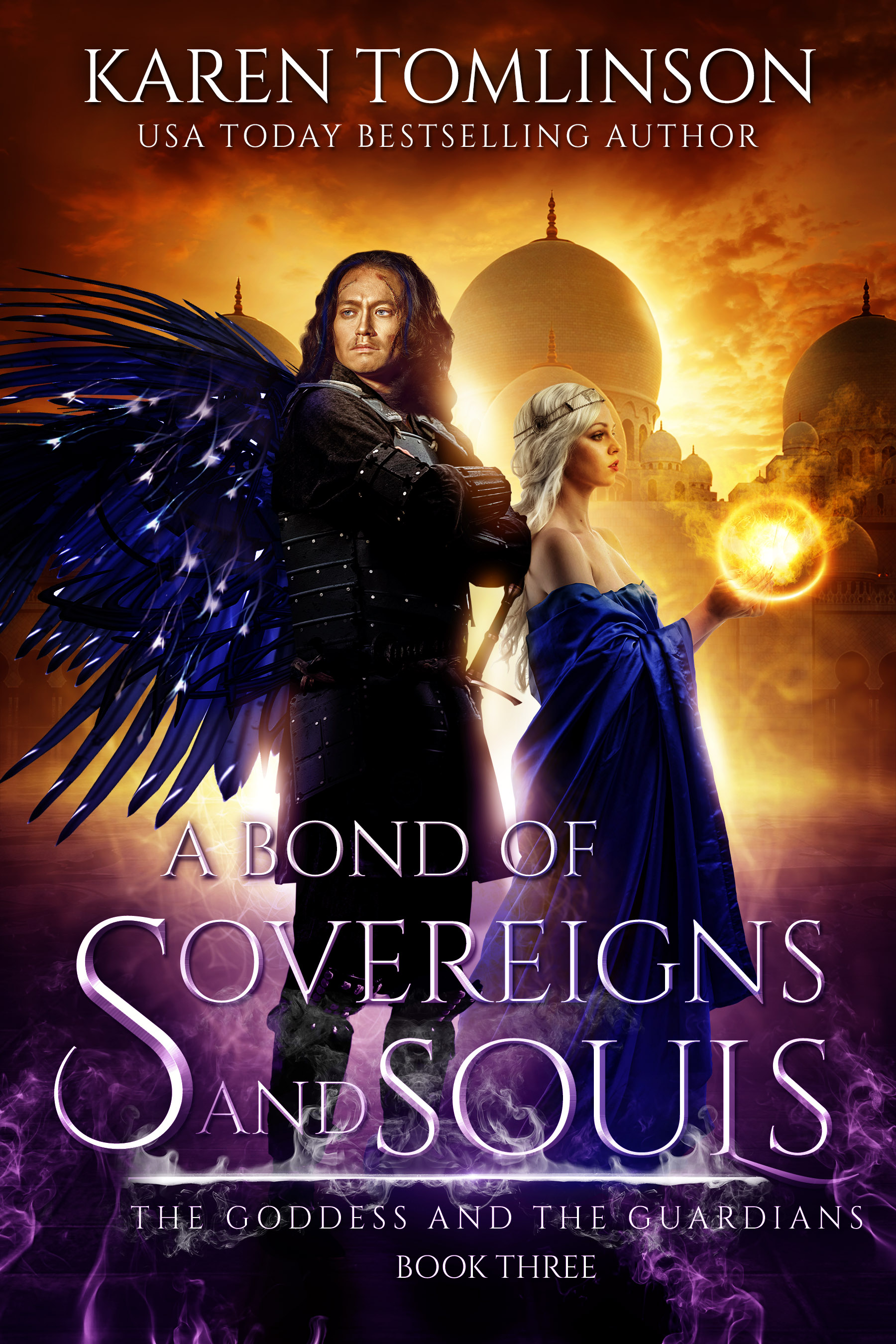 A Bond of Sovereigns and Souls

A shattered bond. A world at war.

Diamond has learned to beat the odds but soon discovers triumph in one battle does not win a war.

The fae kingdom is in turmoil. The lord of Chaos is coming.

Ripped apart from Hugo, the fae warrior who holds her heart, Diamond embarks upon a perilous journey. Determined to save the souls of the mortal world, she risks everything to forge vital new alliances. But her only bargaining chip is the blood in her veins. Somehow, she must use it to persuade the sovereigns of the Eight Kingdoms to unite in war.

Utterly alone, Hugo endures unspeakable horrors. Fighting demons of his own, he must confront a painful sacrifice. His only hope? That the mighty dragons heed his plea for help. His world and heart will be doomed if he cannot save Diamond before the darkness can end her.

A Bond of Sovereigns and Souls is an action packed, high fantasy tale that will astound lovers of Sarah J Maas and Sabaa Tahir, transporting them into a world of magic, wizards and war.

*Readers will delight in this third instalment of The Goddess and the Guardians, a young adult fantasy series by USA Today bestselling author Karen Tomlinson 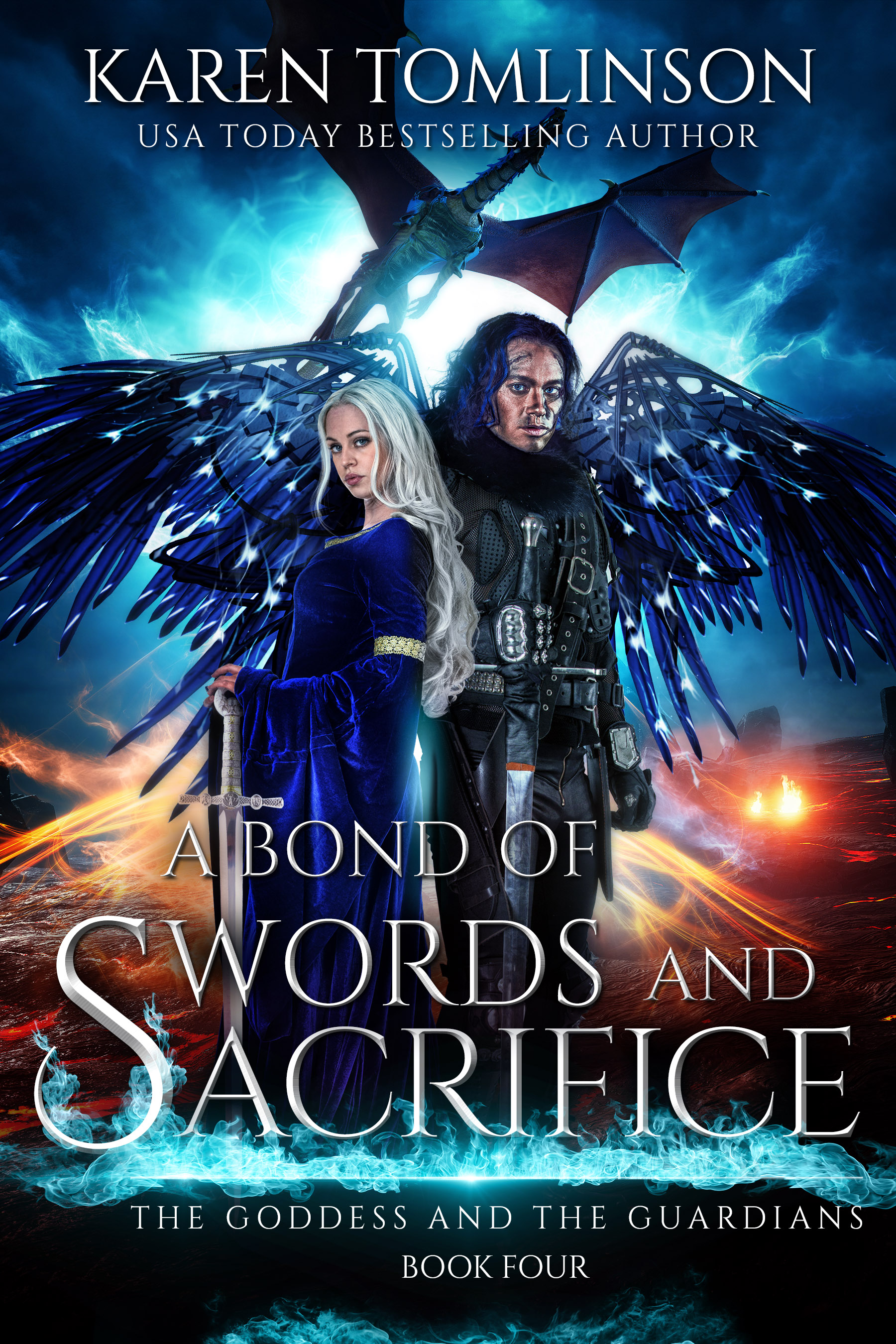 A Bond of Swords and Sacrifice

Reeling from their encounter with the God of Chaos, Diamond and Eryanth Arjuno, the true heirs of the Avalonian crown, strive to rekindle their broken bonds and heal their shattered hearts.

But the machinations of war are never simple. Challenges must be faced and threat hovers ever closer as painful truths are revealed and blood ties are uncovered.

No longer an innocent village girl but a fierce and powerful queen, Diamond will fight for those she loves. She will wage war for her people and battle for the survival of every soul in the Eight Kingdoms. But she soon discovers destiny will exact a high price. If she cannot accept the cost to her heart and soul, the Eight Kingdoms—and those dearest to her, will be doomed for eternity.

Prepare yourself for magical lands, heart pounding battle, sailing through vast oceans and flying with fierce dragons. You’ll be pushed to your limits and sucked back in for this final, breathtaking adventure in The Goddess and the Guardians series. It’s the epic conclusion you never knew you were waiting for.